In news that, reportedly, won’t affect many users, Facebook has announced that, effective June 15th, it will remove its peer-to-peer payments option in both the UK and France. 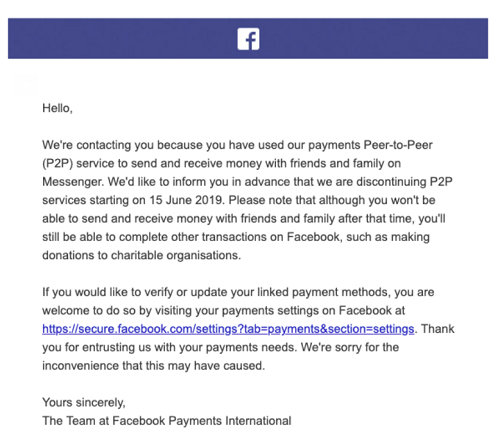 As explained by Facebook, users in these regions will still be able to make donations and ‘other transactions’ through the app, but peer-to-peer sharing will be removed, rolling back the option that was first launched in Europe in November 2017.

According to TechCrunch, Facebook’s official statement on the change suggests that the option hadn’t proven very popular with users.

“We are terminating the ability to send and receive payments in Messenger in both the UK and France effective June 15. After evaluating how we give people the best experiences in Messenger, we made the decision to focus our efforts on experiences that people find most useful.”

Add to that the fact that more stringent regulations over online financial transactions will come into effect in Europe later this year, and you can see why Facebook has chosen to depreciate the option. And there’s also Facebook’s ongoing cryptocurrency efforts, and the potential of that project to facilitate a whole new payment system. Given the various elements, the change makes sense, and may not signal anything more significant on the horizon – at least, not just yet.

But The Social Network’s Blockchain project is likely where people will be pointing – it’s not clear exactly what that project will produce, but all indications suggest that Facebook is working on its own peer-to-peer payments system, more specifically focused on the Indian market, but likely to flow over into other regions, which would supersede this current process anyway. It doesn’t seem likely that Facebook will have the infrastructure for this project in place before the implementation of the aforementioned new regulations, so Facebook may well be shuttering it in the knowledge that it’ll roll out an alternative in the near future.

As such, at this stage, this is a minor announcement, but it may be another element in Facebook’s broader payment plans.