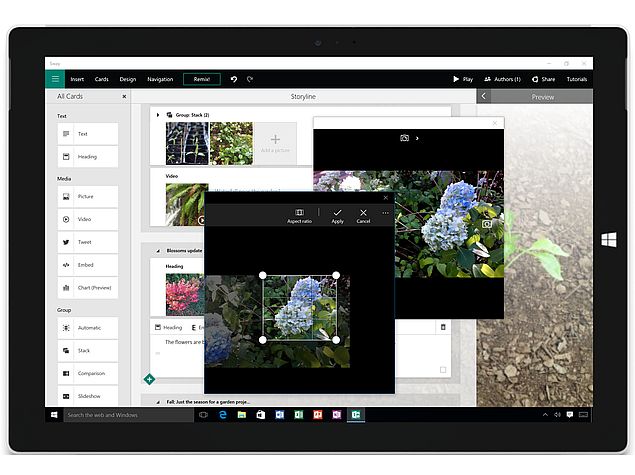 Microsoft on Wednesday announced the release of its digital storytelling app, Sway, to the general public. The app was until now under ‘Preview’ mode. The firm also introduced Sway’s Windows 10 app along with a new layout and publishing features. The iOS app has also been updated.

For those unaware, Sway was first introduced in October last year. The app is used to create professional designs including images, videos and text together to make a story. It also comes with a compatibility engine that does not hamper the presentation whether it is viewed on a smartphone, tablet, laptop or PC. Users can even import content from social media websites like Facebook, Twitter, and Youtube. The app can be taken as an alternative to Microsoft PowerPoint. Also, it is the company’s newest addition to the Office productivity suite, and is integrated with Office Online.

Users can simply sign in with their Microsoft account on Sway.com to get started, or download the iOS or Windows 10 app. There are not many differences between the Web and app versions. While the Web version would need a constant Internet connection, the Windows 10 version can be used offline as well. However, to import images and videos from Facebook, Twitter etc., it would require an Internet connection. Sway for Windows 10 can be downloaded from Windows Store. The Windows Phone version would be arriving in the ‘coming months’.

Microsoft has added a new layout in Sway’s navigation pane that “displays groupings of content (images, text, videos, tweets, etc.) one screen at a time.” The company adds that, “Whether it’s a few words with a knockout background image, a set of images and supporting bullet points, or a cluster of interactive elements, now you can deliver a killer presentation in-person or for viewing across many devices.” Also, sharing a Sway presentation to Docs.com is also possible. “Along with adding support for Sway, we’ve also improved the overall Docs.com experience for publishing, managing and consuming content.”