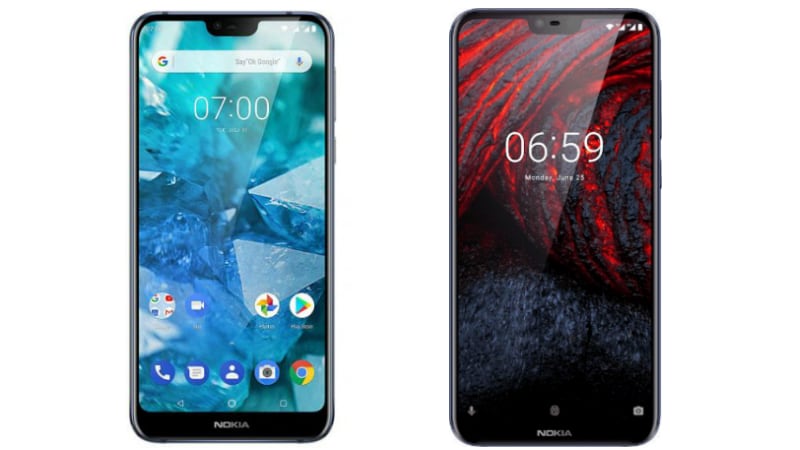 Nokia 7.1 is HMD Global’s latest smartphone in its expansive range of Nokia handsets that has grown over the past couple of years. The Nokia 7.1 borrows the design philosophy of the Nokia 6.1 Plus and Nokia 5.1 Plus and sports a 19:9 display with a notch, a substantial chin, and vertically aligned dual rear cameras. In the mid-range smartphone segment, the Nokia 7.1 competes with HMD Global’s Nokia 6.1 Plus. The Nokia 6.1 Plus has similar specifications, including the same Snapdragon 636 SoC, 19:9 display, and 3,060mAh battery. However, it does have a different set of cameras and will get Android Pie this month. Let’s check out the differences in pricing and specifications of the Nokia 7.1 and Nokia 6.1 Plus.

Nokia 7.1 price ranges from EUR 299 (roughly Rs. 25,300) to EUR 349 (about Rs. 29,600), depending on the region it is being sold in. The phone has been launched in Gloss Midnight Blue and Gloss Steel colour variants, and will be available in European markets starting later this month. There is currently no word on India pricing and availability.

On the other hand, the Nokia 6.1 Plus has been priced in India at Rs. 15,999 and is available, in Gloss Black, Gloss Midnight Blue, and Gloss White colour options, via Flipkart and Nokia online store in the country. Customers are entitled to no-cost EMI plans and free data on the Jio network. The Nokia 6.1 Plus was first launched globally in Hong Kong at a price of HKD 2,288 (roughly Rs. 21,500) in Blue and White colour options.

Both the Nokia 7.1 and Nokia 6.1 Plus are dual-SIM (Nano) smartphones that run a stock version of Android 8.1 Oreo, based on the Android One programme. While the Nokia 7.1 is slated to get Android 9.0 Pie next month, the Nokia 6.1 Plus has been confirmed to receive the update in October itself.

Both these phones are powered by Qualcomm’s octa-core Snapdragon 636 SoC. While the Nokia 6.1 Plus only offers a 4GB RAM/ 64GB inbuilt storage configuration, the newly-launched Nokia 7.1 allows the user to choose from a 3GB RAM/ 32GB storage and a 4GB RAM/ 64GB storage variant. Both smartphones support external storage via microSD cards (up to 400GB).

Once again, both the Nokia 7.1 and Nokia 6.1 Plus sport non-removable 3,060mAh battery units under the hood. The Nokia 7.1 comes with support for 18W fast charging, which claims to deliver 50 percent charge in 30 minutes. The Nokia 6.1 Plus has support for 10W fast charging. Both phones sport face-mounted fingerprint sensors and software-based face unlock authentication.