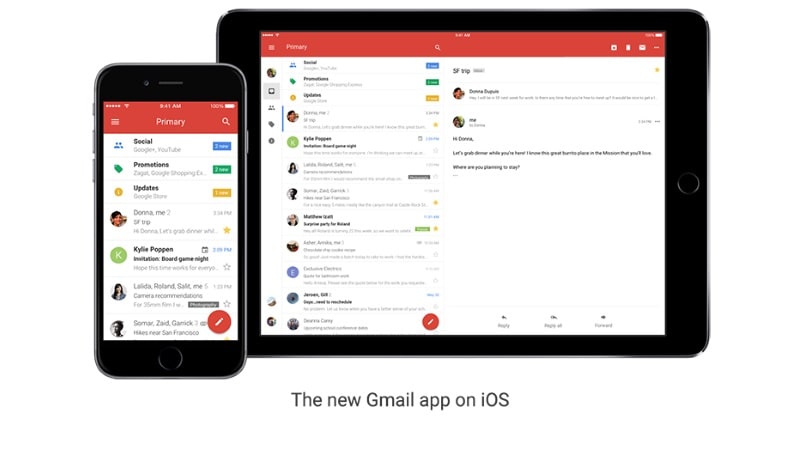 Google’s Gmail app on iOS has been updated by the search giant and the company has termed the latest update as “The biggest overhaul of the app in nearly four years.” The largest component of this overhaul is constituted by visual aspect of the app as it has been redesigned entirely. The new interface of the app on iOS is fairly reminiscent of the Android version due to its Material Design philosophy.

The Gmail for iOS update (v5.0.3) does not stop at the redesign as it adds an important feature that was earlier missing from the app – Undo Send. There must have been times when you might have sent a mail by mistake and wanted to undo it but couldn’t. This feature allows you to prevent the humiliation that can be caused from such a situation. Users will be able to choose from 5, 10, 20, and 30-second windows in which they can perform the Undo Send function. It can be turned on and adjusted from Settings > Undo Send.

“It’s the Gmail you know and love, with a fresh new look, sleeker transitions and some highly-requested features. It’s a lot faster, too,” the search giant said in its official blog post.
Gmail app on iOS now provides better spelling suggestions as well as allows you to search for the mails even faster. “Search faster with instant results and spelling suggestions (like when you type ‘flighht’, but you really meant ‘flight’),” the company said.
With the Gmail for iOS update, users can now swipe to archive and delete the mails within the app on iOS. The update is already available and can be downloaded from the App Store. Google on Monday also overhauled the Calendar app for iOS.