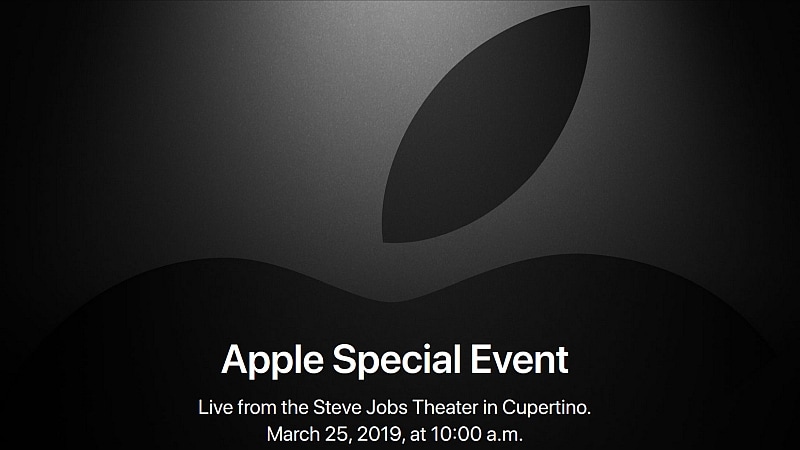 Apple is holding its ‘Show Time’ event today at the Steve Jobs Theater, Cupertino, California. The Apple event kicks off at 10am PDT (10:30pm India time), and you can get all the details of how to watch the live stream right here. The company is expected to unveil its long-rumoured streaming service. Apple is anticipated to launch both a subscription TV and video service, and has been in the news for signing deals with content providers as well as producing its own original shows. The streaming service will reportedly be available globally, taking on Amazon Prime Video and Netflix amongst other smaller rivals. Additionally, the company will also reportedly talk about a news subscription service. This is the first Apple launch event of 2019.

Apple will live stream its Show Time event on its dedicated events page, and the live stream was at the time of writing already playing, showing an empty Steve Jobs Theater. As we mentioned Apple’s March 25 event will kick off at 10am PDT (or 10:30pm IST).

To watch the Apple event live stream, the company recommends navigating to the page using Safari on the iPhone, iPad, or iPod touch, running iOS 10 or later. Viewers can also use Safari on a Mac running macOS Sierra 10.12 or later, while Windows 10 users will need to use Microsoft Edge.

Apple also notes that streaming to Apple TV via AirPlay requires an Apple TV (2nd generation or later) with the latest Apple TV software or tvOS. It adds that other platforms may also be able to access the stream using recent versions of Chrome or Firefox (MSE, H.264, and AAC required).

What to expect from Apple Show Time event today

Recent reports indicate that Apple will launch a streaming television and video service at its March 25 Show Time event. The company has long hinted at a planned video service, spending $2 billion (roughly Rs. 14,000 crores) in Hollywood to produce its own content and signing major stars such as Oprah Winfrey.

People familiar with the matter earlier told Reuters that the service may resell subscriptions from CBS Corp, Viacom. and Lions Gate Entertainment Corp’s Starz among others, as well as Apple’s own original content. Apple is also in discussions with HBO, part of AT&T-owned WarnerMedia, to become part of the service and it could yet make it in time for the launch, according to a person familiar with the matter.

The Apple’s streaming service is expected to launch globally, an ambitious move to rival services from Netflix and Amazon Prime Video. Apple’s App Store, where the service is likely to be distributed, is currently available in more than 100 countries.

The event is likely to be Apple’s first major media event in which hardware is not the primary focus, said Ben Bajarin, an analyst with Creative Strategies. That is a big shift for Apple, which earlier this year moved to make its Apple Music services work on smart speakers from rivals such as Amazon and partnered with Samsung Electronics to let Samsung TV owners watch video purchased from Apple on Samsung sets.