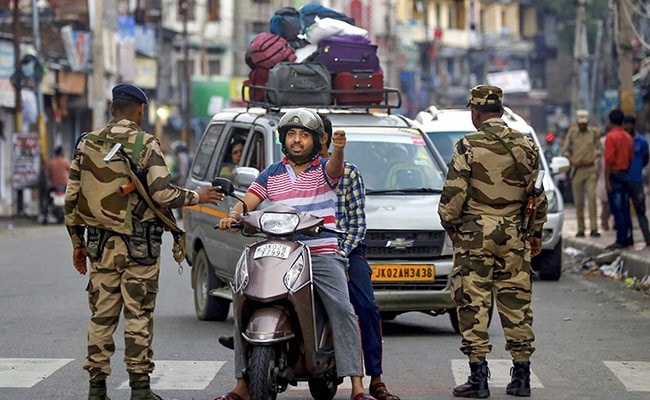 New Delhi: After five days of security lockdown in Jammu and Kashmir, phone services and internet were partly restored this morning and restrictions in movement were eased to facilitate Friday prayers. Thousands of security personnel remain positioned across the Kashmir Valley to watch out for any trouble following the centre’s decision to end special status and turn the state into two union territories.

The gates of the Jama Masjid in Srinagar were shut, indicating that prayers were unlikely in the city’s main mosque. However, prayers would be allowed in smaller mosques in the interiors, said officials, and enough personnel had been posted to ensure order.

Restrictions may be reduced further if the prayers take place without any trouble, officials said.

Around 400 political leaders, including former Chief Ministers Mehbooba Mufti and Omar Abdullah, remain in custody as the government tries to avoid protests or rallies.

Governor Satyapal Malik yesterday reviewed the situation and assured that restrictions would be softened for Friday prayers and Eid festival next week.

Prime Minister Narendra Modi, addressing the nation on his Kashmir decisions on Thursday, said the government would ensure that people didn’t face any difficulties during Eid-ul-Adha celebrations on Monday.

“The government is providing every possible help to our friends who live outside Jammu and Kashmir and want to go back for Eid,” PM Modi said.

Because of a communication breakdown, people of the state living in other parts of the country were not able to contact their families.

PM Modi also acknowledged the problems faced by the people amid the lockdown.

“The freedom from Article 370 is a reality. But another reality is that people have faced problems due to the precautionary measures (taken by the government). They are facing that too,” he added.