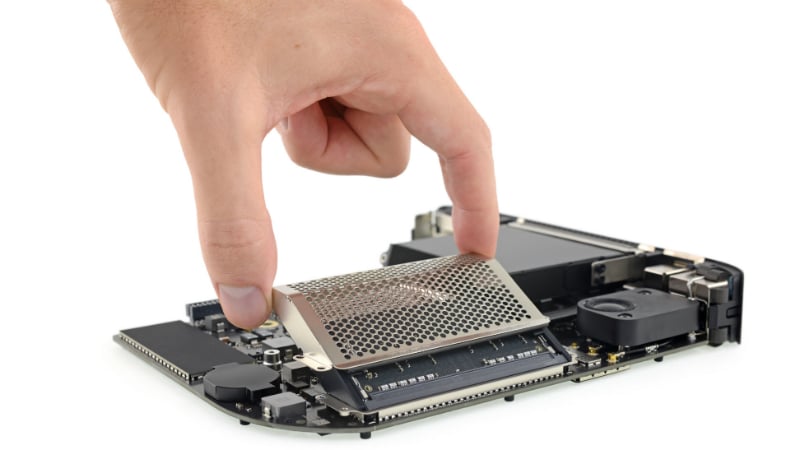 Apple at its October 2018 event unveiled a few new products – including a much-needed upgrade to its Mac mini small form factor computer. The new Mac mini offers all of the good stuff that a purist computer user wants – plenty of hardware ports including a 3.5mm headphone jack and an HDMI port and expandable/ replaceable RAM sticks. The guys over at iFixit put the Mac mini (late 2018) to their standard teardown to find out how replaceable and repairable the internals of the small desktop computer really are.

The Mac mini (late 2018) comes in two identifier models – A1993 and EMC 3213. It gets two USB Type-A ports, four USB Type-C ports, a 3.5mm headphone jack, an Ethernet port, and an HDMI port. Next up, the 60 percent-recycled plastic bottom cover is opened up to reveal a single fan watching over the Mac mini’s insides. The proprietary Mac mini logic board removal tool is then used to carefully take out the logic board.

On the logic board, the RAM is protected by a heavy metal cage which allows it to operate at 2666MHz with no chance of accidentally interfering with other functions on the board. iFixit praises the return to SO-DIMM RAM; the 2014 Mac mini model had soldered-down chips. This gives the owner the freedom to upgrade RAM whenever they want.

The system speaker on the new Mac mini model is sized similar to the one seen in older Mac mini models. There is no modular AirPort card this time around, considering logic boards have sort of absorbed all wireless functions.

Removing all of the above reveals the CPU, graphics chip, 128GB of Toshiba TSB3225V81199TWNA1 flash storage, an Intel SR40E CM246 platform controller hub, an Intel JHL7540 Thunderbolt 3 controller, a Broadcom BCM57766 Gigabit Ethernet controller, and a 338S00342-A0 which is likely an Apple PMIC.

The back of the logic board also holds a lot of internals include Wi-Fi/ Bluetooth modules, audio codec, a DisplayPort 1.4 to HDMI 2.0 converter, power controllers, and more. The power supply on the new Mac mini has been upgraded to 150 watts. You can check out all of these details here.

iFixit gives the Mac mini (late 2018) a repairability score of 6 on 10. Pros include the absence of tough adhesive to hold components together, straight-forward disassembly, and SO-DIMMs. Cons include non upgradeable CPU and storage, and the fact that the entire logic board will need replacing if any of the many ports is damaged or worn. It even recommends giving this computer the “Pro” tag given the freedom to upgrade, configure, and connect as required.