Intel has announced two new overclockable enthusiast-class CPUs, the first of itsSkylake generation, at the ongoing Gamescom convention in Cologne, Germany. The Core i7-6700K and Core i5-6600K are based on a brand new architecture. The company also formally launched its Z170 chipset which will be required to support the new processors.While the Core i7-6700K has a base frequency of 4.0GHz and can scale up to 4.2GHz under load, The Core i5-6600K is clocked at 3.5GHz and can be pushed to 3.9GHz. Both models feature four cores and integrated Intel HD 530 graphics, but the Core i7 supports Intel’s Hyper-Threading scheme that allows each core to execute two threads. The former has 8MB of L2 cache while the latter has only 6MB. 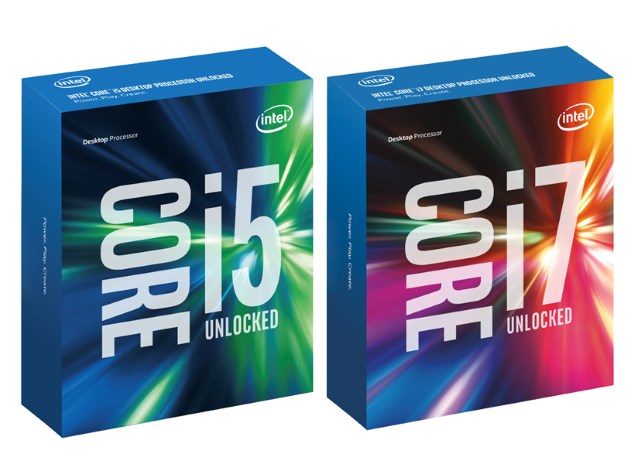 Both use the new LGA1151 socket and support DDR4 or DDR3L RAM. Platforms built with either of these CPU and a Z170 motherboard will have 16 lanes of PCI-Express 3.0 connectivity originating directly from the CPU. Both new CPUs have 91W TDP ratings and for the first time, will not come with coolers in the box. Intel believes that enthusiasts are unlikely to use bundled coolers anyway, and many might already have coolers which are compatible since the mount has not changed.

The Skylake generation is a ‘tock’ in Intel’s tick-tock product cycle, which means it is anew architecture and uses a proven manufacturing process – in this case the 14nm node which was introduced with Broadwell beginning last year. Intel previously announced its 10nm node will be delayed, resulting in an extra ‘tock’ in the 14nm lifecycle.

The timing and venue of the launch underscore Intel’s strategy to target PC gamers and enthusiasts. The company had previously used GDC as a launchpad for its overclockable gamer-focused Devil’s Canyon Core i7 and Core i5 pair. More detailed information about the rest of the sixth-generation Core lineup and the Skylake architecture itself will only be disclosed at Intel’s annual Developer Conference in two weeks.

The two processors are the first of the lineup that will be marketed as Intel’s sixth-generation Core family. Variations of Skylake tailored for different classes of devices will follow, including ones for ultra-thin tablets, small-form-factor devices, and notebooks. Interestingly, the company also teased an unlocked K-series SKU for notebooks which will be released later in the year.

Intel is also demonstrating its Thunderbolt 3 technology and its latest SSDs at Gamescom 2015, including a new 800GB model of the SSD 750 series. Component companies including Asus, Gigabyte, MSI, ASRock and EVGA will be exhibiting Z170 motherboards, and integrators including Alienware, Acer and HP are showing off fully built systems.