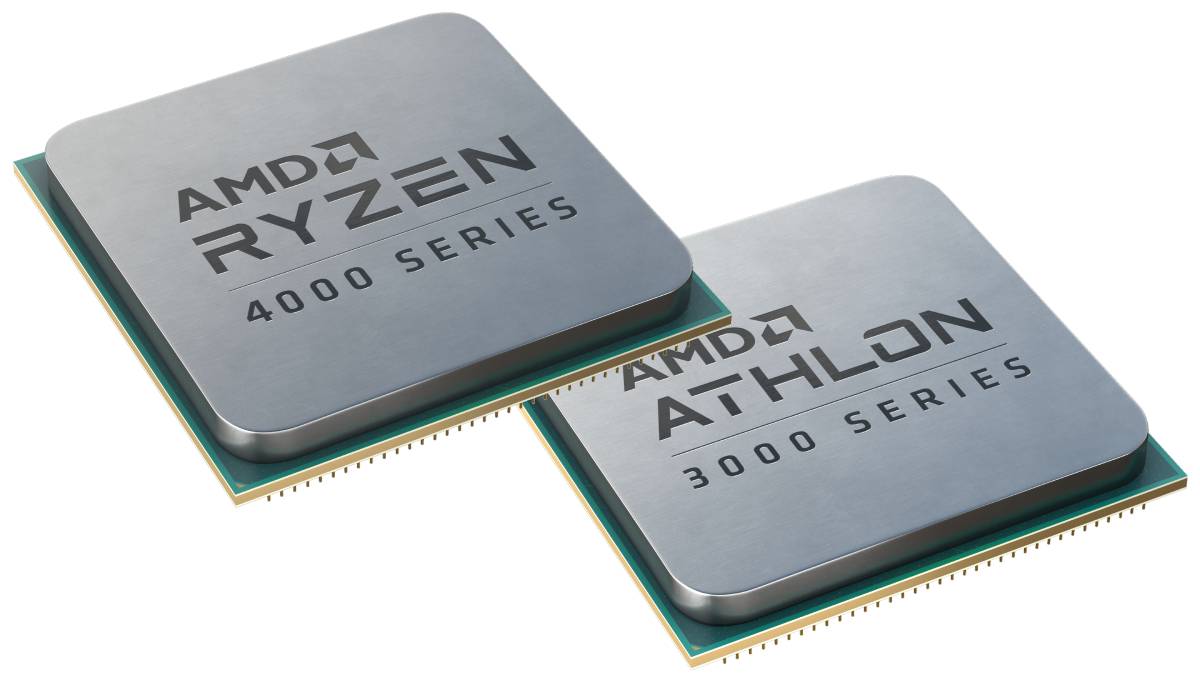 AMD has unveiled new Ryzen 4000G and Ryzen Pro 4000G lineups of desktop APUs or Accelerated Processing Units, the company’s term for CPUs with integrated graphics. Codenamed ‘Renoir’, these share the same design as AMD Ryzen 4000 series laptop processors. Renoir is based on the same 7nm Zen 2 core microarchitecture as the current desktop Ryzen 3000 CPU lineup, with the addition of AMD Radeon Vega graphics capabilities. This is not the next-generation Ryzen series based on the Zen 3 architecture, which is still expected to launch later this year.

The newly announced processors will only be available in bulk to OEMs and system integrators for use in pre-built desktop PCs when they become available, which means that retail boxed units for DIY buyers will not be sold. For this reason, the prices of individual units have not been announced.

Focusing on OEM players such as HP and Lenovo will allow AMD to penetrate the pre-built desktop market. The Ryzen series has been popular with enthusiasts and DIY builders, but that’s still a small market compared to the huge demand for desktop PCs used in offices, schools, and homes. The company promises over 200 percent better graphics performance and over 30 percent better multi-threaded performance with its top-end Ryzen 7 4700G compared to an Intel Core i7-9700.

AMD has also previously focused on CPUs without integrated graphics, which are popular with gamers and power users who will be buying powerful discrete graphics cards anyway, but not with budget-minded buyers. It is not immediately clear whether AMD plans to release these or similar models in retail in the future.

The Ryzen 4000G and Ryzen Pro 4000G lineups are aimed at consumer and business use respectively. They fit into the same Socket AM4 interface as all previous desktop Ryzen CPUs and will be compatible with existing 400-series and 500-series desktop motherboards. The platform allows for up to DDR4-3200 RAM, and eight PCIe 3.0 lanes rather than PCIe 4.0 which Ryzen 3000 series CPUs support.

There are six models in each of the two series; one 65W and one 35W model in the Ryzen 3, Ryzen 5, and Ryzen 7 tiers. The top-end Ryzen 4700G marks the first time that AMD has combined a high-end CPU with integrated graphics. It has eight core and 16 threads, with base and boost speeds of 3.6GHz and 4.4GHz respectively, plus eight Radeon Vega graphics compute units. The Ryzen 5 models have six cores and seven CUs, while the Ryzen 3 models have four cores and six CUs. All Ryzen Pro CPUs support full memory encryption, remote management and bulk deployment, plus additional security features and guaranteed availability.

In addition to these lineups, AMD has also announced new Athlon 3000 and Athlon Pro 3000 desktop APUs which will be priced lower and target more entry-level systems. These are based on the previous-generation Zen+ architecture, used by desktop Ryzen 2000 series CPUs. There are three models each in the Athlon 3000 and Athlon Pro 3000 series, with one 65W and two 35W chips. The Athlon Gold 3150G has four cores without multi-threading, running at base and boost speeds of 3.5Ghz and 3.9GHz respectively. The Athlon Silver 3050GE has two cores with four threads, a base clock of 3.4GHz and no boost functionality. All Athlon models have three Vega graphics CUs.