Honor 8X₹ 14,999, the company’s latest smartphone in India, will go on sale in the country via Amazon tonight. The Huawei sub-brand launched the Honor 8X in India earlier this month, following a release in China in September. The Honor 8X comes with a display notch and sports thin bezel on all sides. There is a vertically stacked dual camera setup at the back, a rear-mounted fingerprint sensor, and the handset supports Face Unlock. A key AI-powered feature in the Honor 8X includes its ability to scan a product using the camera to automatically search it online for the user to purchase. Notably, the smartphones will go on sale exclusively on Amazon at 12am IST (Midnight). 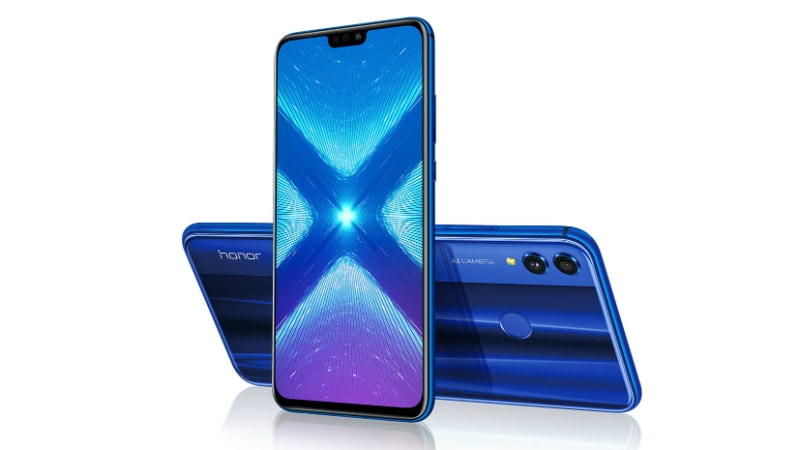 The price in India of Honor 8X starts at Rs. 14,999 for the 4GB RAM/ 64GB storage model. Meanwhile, the 6GB RAM/ 64GB storage variant costs Rs. 16,999, and the 6GB RAM/ 128GB storage variant is priced at Rs. 18,999. As mentioned, the handset can be purchased via Amazon India starting October 24 onwards. Notably, it comes in Black, Red, and Blue colour models. Launch offers include 1TB data benefits for Bharti Airtel subscribers.

The Honor 8X features a dual rear camera setup with a 20-megapixel primary sensor and a 2-megapixel secondary sensor, paired with f/1.8 aperture and PDAF. At the front, the smartphone has a 16-megapixel selfie camera with f/2.0 aperture and fixed focus.

Inbuilt storage options include 64GB and 128GB, plus storage on the phone is expandable via microSD card (up to 400GB). Connectivity options in the Honor 8X include 4G VoLTE, dual-band Wi-Fi 802.11ac (2.4GHz and 5GHz), Bluetooth v4.2 LE with aptX support, GPS/ A-GPS, GLONASS, BeiDou, a Micro-USB port, and a 3.5mm headphone jack. Sensors on board include an ambient light sensor, compass, fingerprint sensor, gravity sensor, gyroscope, and a proximity sensor.

The smartphone is fuelled by a non-removable 3,750mAh battery, with support for 5V/2A (10W) charging and a power saving battery features. In terms of dimensions, the smartphone measures 160.4×76.6×7.8mm.