Google Pixel 3₹ 71,000 and Pixel 3 XL are the first to support Android Pie’s Android Protected Confirmation that is designed to securely perform critical transactions such as mobile payments and controlling medical devices. The feature that comes in the form of a mobile OS API was detailed back in May. It sits alongside the presence of the dedicated Titan M security chip that enables a secure and safe experience on the new Pixel models. Google has separately removed its Voice Match functionality from the Pixel 3 and Pixel 3 XL and instead offers “personal results” on the lockscreen of the latest flagships after the “OK Google” command. It has also been found that the search giant is secretly shrinking the radius of each corner of the display using a subtle software trick to give more rounded corners particularly on the Pixel 3 over the Pixel 3 XL. The Pixel 3 XL, on the other hand, has been spotted with support for 1440p60 HDR playback. Separately, it has been found that the gesture system that is a part of the default Android Pie on the Pixel 3 models can be disabled by giving up the Pixel Launcher. It is also reported that Google is bringing a touch of the Pixel 3 to the Pixel 2₹ 36,099 by adding its ‘Now Playing’ music identification feature to the dated model. In a blog post on its Android Developer website, Google has confirmed that the Pixel 3 and Pixel 3 XL are the first to support Android Protected Confirmation, the feature that “leverages a hardware protected user interface (Trusted UI) to perform critical transactions completely outside the main mobile operating system”. The feature comes as optional, within Android Pie and once deployed, it is claimed to help users make safe mobile transactions, including bank transactions. “Protected Confirmation increases the bank’s confidence that it acts on your behalf, providing a higher level of protection for the transaction,” the company claims in the blog post. It also adds an additional security relative to secondary authentication forms such as One Time Password (OTP) or Transaction Authentication Number (TAN).

The Trusted UI that has been invoked through Android Protected Confirmation once you’re making a transaction comes as a barrier to filter out malicious access. It looks similar to the bootloader and has a white background to highlight the nature of the transaction to receive your approval. You need to confirm the transaction using a hardware control on your device. “Once the user approves a transaction, Protected Confirmation digitally signs the confirmation message. Because the signing key never leaves the Trusted UI’s hardware sandbox, neither app malware nor a compromised operating system can fool the user into authorising anything,” Google explains the scope of its new development. 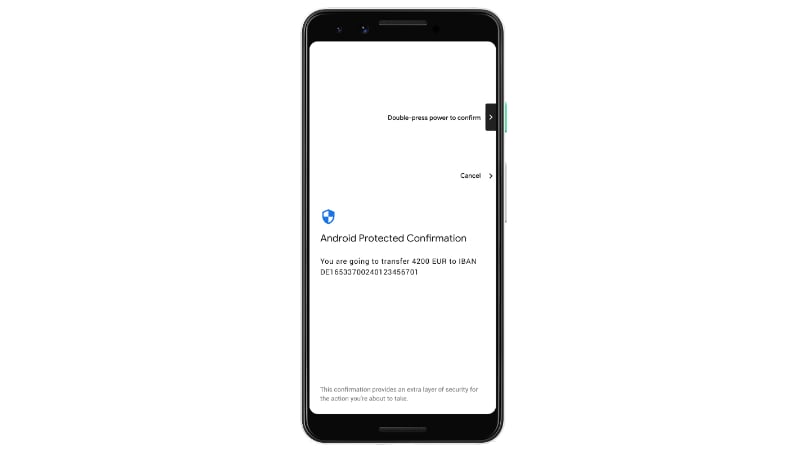 Alongside securing bank transactions, Android Protected Confirmation can help secure medical transactions. Google already demonstrated how the new initiative can enable medical safety by partnering with OmniPod DASH Insulin management system. The company is also working with FDA as a part of industry-wide consortium DTMoSt to define a standard for control medical devices and eventually grow the scope of its Protected Confirmation. Moreover, there are plans to work with other manufacturers to bring the new experience to devices other than the Pixel 3 family.

Alongside securing transactions using Android Protected Confirmation, Google has uplifted security on the Pixel 3 by removing support for Voice Match that was available on the past two Pixel models to unlock the hardware by recognising user voice through “OK Google” or “Hey Google” command. Twitter user Matt Johnson, as spotted by PiunikaWeb, found the new Pixel devices aren’t working with Voice Match. Google in one of its support pages confirmed the removal and highlighted that instead of unlocking the device, users can access the Google Assistant on their Pixel 3 devices directly from the lock screen by passing the “OK Google” command. The company calls the new experience as “personal results” that can be provided in the form of latest emails, Google Calendar entries, Contacts, Reminders, or Shopping lists among others – all by invoking the Google Assistant. There is also a workaround to turn off lock screen personal results.

You need to access the Assistant by holding down the Home button or saying “OK Google” command. Now, tap the compass icon and then press the more button with a three-dot icon and then go to Settings > Assistant. You after that need to navigate to the Devices option and then select your phone. There will now be a screen from where you can turn off the Lock screen personal results option.

It has separately been spotted that the Pixel 3 XL, between the two new Pixel models, comes with 1440p60 HDR playback support. Users on Reddit have spotted the new change that comes as an upgrade over 1080p60 HDR support on last year’s Pixel 2 XL. This is also higher than the 1080p60 HDR option available on the Pixel 3.

While the trick to making the display corners more rounded is exclusive to the Pixel 3, XDA Developers has found that both new Pixel models – the Pixel 3 and Pixel 3 XL – can ditch the original gesture systembut by giving up the default Pixel Launcher. You need to use ADB on your computer and put your Pixel handset on the USB Debugging mode by enabling Developer options to remove gestures. Once the setup is available, you need to first uninstall the Pixel Launcher using ADB and then enable the old-style navigation bar by passing “settings put secure system_navigation_keys_enabled 1” command. After that, you need to reboot the handset by giving the “reboot” command via ADB to get the old, navigation experience.

Apart from bringing the old experience to the new models, Google is bringing a fresh feel to last year’s Pixel devices. A support page dedicated for Pixel phones has affirmed that the ‘Now Playing’ feature that debuted on the Pixel 3 and Pixel 3 XL this year is heading to the Pixel 2. The page says that the feature will arrive “soon”, though there isn’t any concrete release date.